In The New York Times this week Pilar Viladas writes about a fascinating California house — and by fascinating I don't mean just because it is the longtime home of legendary rake and movie producer Robert Evans. For me it's far more thrilling that the house at 1032 Beverly Drive in Beverly Hills was designed in 1942 by architect James Wolff for an interior decorator nobody but nobody remembers now, James B. Pendleton (né James Archibald Blakely, 1904 — 1995). A mentor of one of America's great modern-minded designers, Mel Dwork, the Oregon-born Pendleton worked in New York City in the early part of his career and was a great pal of Ruby Ross Wood's before he sought and found fame and fortune in Hollywood, as well as a wealthy wife, Mary Frances (1896 — 1963).

Called Woodlands and wreathed in vines, it is a magical structure well worth coveting, where Hollywood Regency meets François Mansart. It's also on one level, an architecture decision with a practical purpose; a deformed hip made climbing stairs difficult for Pendleton's wife. But what's always struck me as especially chic is the living room fireplace set in front of a window. If memory serves, the smoke is channeled up the sides, an engineering trick that leaves a framed garden view instead of a standard wall. Jayne Wrightsman had one of those window-topped fireplaces at her house in Palm Beach, as I recall, and I know I've seen one in an early-nineteenth-century house in France, built during the reign of Napoléon I.

I do hope somebody's working on a book about John Woolf and the houses he built for so many celebrities. There's a perfect spot on my bookshelf for it. 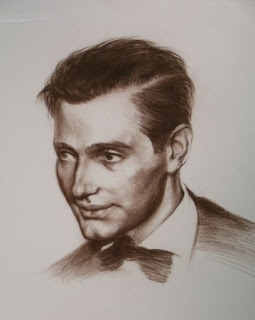 “I learned my trade by going out every evening as a young man. I went to every pretty house in France and Italy and other places, too, and I remembered them all, even down to what was on each little table.”

So said interior designer Vincent Fourcade (1934-1992), a master of the magnificent.


Simply put, nothing beats keeping your eyes open.
Posted by An Aesthete's Lament at 12:12 18 comments: