This week Stefan Hurray of the diverting style blog Architect Design posted all manner of pictures of his first-ever visit to the White House in Washington, D. C., which is presently decorated for the holidays. And what to my wondering eyes did appear but an image he snapped of the curtains in the entrance hall, aka the grand foyer, which is shown above.

Take a look at the flamboyant swooping valance holding aloft the red-silk panels dripping with saffron and scarlet tassels. Now that's swagger. A member of the White House curator's office told me the early-nineteenth-century-inspired valances were installed in 1998 during the Clinton Adminstration, under the direction of the White House Preservation Committee, and are made of carved and gilded wood. The curtains were made by Nelson Beck, an eminent District of Columbia upholsterer.

Oh, and the Honduras mahogany concert grand piano with the eagle supports? A custom-made version of Steinway's D-274 model, it was completed in December 1938 to the designs of White House consulting architect Eric Gugler and with inspired input from Franklin Delano Roosevelt. As for the stenciled-gold scenes that decorate the curved side of the piano, The New York Times reported, in an article about the piano's arrival at the White House, they depict "the Virginia reel, the American Indian ceremonial dance, the New England barn dance, the Southern Negro cake walk, and cowboys singing on the Western plains." The Virginia reel, the president said, was one of the Roosevelts' favorite dances. 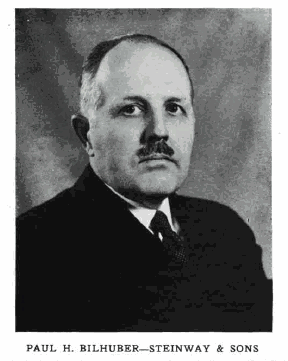