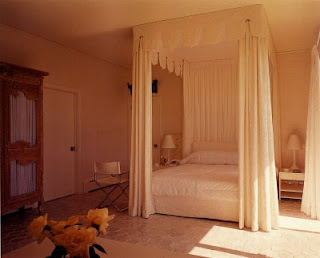 Client: Lydia Buhl Melhado Farr (later Mrs William H Mann, died 1997), third wife of Francis Bartow Farr, one of Wall Street's richest salesmen, according to The New York Times. Heiress to a Detroit industrial fortune, Lydia Farr—then in her early 30s and the mother of two young sons—had an 18-room apartment at 960 Fifth Avenue and a fabled collection of Verdura jewels. And the good sense to hire David Hicks when she and Farr built a modern house in Southampton, shortly after they married in 1966.

Elements: Next to nothing, really. A wall-to-wall field of white-glazed hexagonal Provençal tiles. A 19th-century French armoire, stripped to the raw pine. Sleek white-lacquered side tables topped by dead-plain modern lamps. A director's chair of polished steel and white leather. The bed, however, is the piece de résistance, a towering shelter hung with white-linen curtains printed with an overscale damask pattern and lined with crisp glazed white cotton. It is opulently penitential, like something a world-weary marquise of a certain age might have commissioned after being named abbess of a deluxe convent.

it is all about the bed really,and isn't that what it should be? I love this room and though it's been referenced and copied many a time-it's not yet been equaled. how great to share some archives-thanks. pgt

A wonderful room by DH and a thoughtful surprise gift from the AAL archives. Every day, I click on those three little pictures at the bottom of a post, titled "You might also like..."--which I definitely would--but they just tell me there's been an error. Tell me about it.

Bringing all those posts, all that knowledge, all those accumulated comments by smart people back into the light, where they could acquire even more comments--well that would be the best present I can imagine receiving, and no one would have to go shopping. This could make re-gifting respectable.

"Abbess of a deluxe convent" is the perfect description for this; I could imagine this room being a part of the refined Portuguese convent in Isaac Dinesen's "Blank Page":

It's short and beautiful -- you should read it if you haven't.

I am so glad you are back!
Thank you!