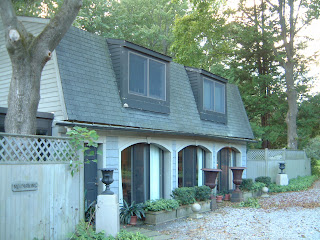 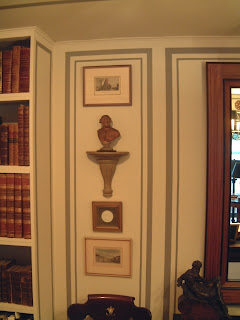 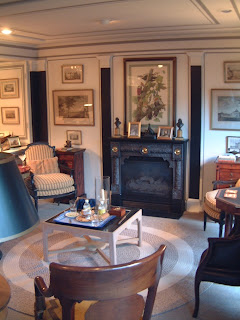 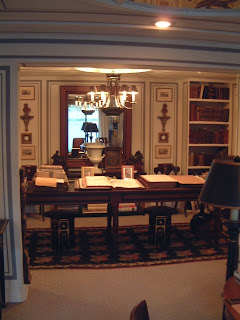 Now, this is the epitome of what decorating means. To me a least.

Agreed, HOBAC. My mouth quite literally dropped when I stepped into this room. Absolutely unexpected. And magical, especially at night, with candles blazing.

Love gaffer's tape! It's super strong though. It was used at a historic house where I worked. They were shooting 12 Monkeys there. When they pulled it up from the wonderful old floors, all of the beautiful parquet came up. OOPS!

A kindred 'Soul' who has ditched the garage for a more Fantastical setting for Books to reside within...yes, even Percier, Vanbrugh and Jones - all with some stage background - would reside within these walls...Very John Wolff meets the outskirts of Versailles...or closer yet, the carriage house of Clarendon Court in Newport!

I love a "GOOD BOOK" that is not judged by its 'COVER'!

If Jean-Michel Frank could create an elegant salon out of straw I guess it shouldn't be a surprise that someone of great talent could create an equally sophisticated scheme using common materials from the Dollar Store. It's like the decorating version of a boxed cake mix. Just add genius!

Here's the real question: how can this kind of ability fly under the radar for so long? And what a shame he wasn't discovered by the world at large--and let's face it: if you haven't heard of this guy, you know that none of the rest of us have--until after he's already dead. But leave it to you to find him. Don't ever leave us again.

Beautiful... I'm heading out for some gaffer's tape now! I adore this type of creativity. Perfection.

Completely amazing. I'll never look at all those prefab garages and double wides that litter upstate the same way again. Not that this garage looks like prefab even from the outside.

Wow, the tape is amazing and completely transforms the space. I look forward to further posts on Langdon.

Now that's a room that can start my engines! What a wonderful folly...did you get to borrow any books?

truly amazing, how could you enjoy the books? more visits. by enlarging the photographs every element and detail is just right- To do it, requires a great deal of creativity, precision, trust, and tape. pgt

I have created Doric metope moldings and Corinthian columned rooms with the architecture painted onto generic wallboard, but now I see the magic of the tape! Amazing what a constrained budget and an unconstrained imagination can create to an effect often greater than that achieved with precious materials.

A Met museum curator once said that the superb 18th century French giltwood furniture was initially created to replace solid silver items melted down to pay for Louis XIV's wars, giving impetus to a wondrous industry and perhaps the world's finest furnishings.

I hate to say it, but gaffer's tape can cure a lot of ills. even let me finish a show once when I sprained an ankle.... Brilliant. Amazing. Students take note.

I can hardly breathe. Absolutely the epitome of what decorating means.

It certainly looks terrific, and clearly a lot of hard work and serious thought has gone into the design. What a treasure trove to which to escape.

Absolutely beautiful. What a charming salons have been conjured up with next to nothing. It illustrates how taste, and knowledge of style, are more important and better than money!

It must have been quite a surprise to walk in there and discover these beautifully detailed chambers.

Is the tape used here is black or grey?

Very much enjoyed the post. I look forward to the magical effects with webbing and burlap.

I'm hyperventilating! I would have had to be dragged from there.

I forgot to say. ( I was in shock for a few hours; I must admit)

this is MAGIC. Decorating at it's best; is MAGIC.

One senses it the minute one steps in the door.

Very rare.
I am very happy it is still extant. Quite miraculous.

This is beyond chic!

absolutely the most brilliant thing i've read in a while, and so witty. love love love this man, and feel a bit embarrassed that as a Canadian (and we are serious about our gaffa tape) i never thought of this! Colette

The Down East Dilettante said...

What HOBAC said. This takes one directly back to those years in the 20's and 30's when chic was more about illusion and flair than merely throwing expensive solutions at some drywall---I'm enchanted.

Oh, hell, let me add jealous to the list. I've craved a pavilion library for years

The equivalent of what picture framers call French lining has always appealed to me~the power of those
two different widths of line creates an authoritative
panel by the simplest of means. But as a rule it is carried out on plaster walls with paint, and it is a hellish
task! The gaffer's tape was a stroke of genius. On the
ceiling too, I see. Oh my...pass the smelling salts, please.

It is wonderfully an example of the "more dash than cash" school of design, to which I heartily belong! Brilliant! Thank you so for sharing and showing such a fine example over ingenuity and imagination trumping money and brand!

prooving yet again that creativity is more important than money :-)

just so merry that you are back to blogging a bit more; am loving every minute of it. thank you. happy happy wishes for the season (& far beyond) :)