NOTE: This article was originally posted on An Aesthete's Lament on 3 November 2008 and has been augmented with additional information.


Most of us will be lucky if our obituaries manage to get our names spelt correctly, let alone offer a glowing encomium. So imagine how gratifying must it have been for Thelma Chrysler Foy (1902—1957) to have seen, from whichever fluffy white cloud she landed on, The New York Times declare the slender, vivacious, and highly strung automobile heiress, on the day after her death from leukemia, "the woman of the greatest taste in the current life in New York."

Nice tribute, no? But what was it exactly that earned the publicly serene, privately tempestuous Mrs Foy her position at the top of the heap? I would argue this: a sensitivity to colour schemes, fashions, and furnishings that threw her brunette good looks into high relief, as well as a control-freak adherence to good housekeeping. As for Foy's nasty temper, perhaps it had something to do with her diet—writer Jean Nathan noted in an article written for Vogue that Foy seemed to live on little more than black coffee.

Some evidence of Foy's high style lies in the archives of the Costume Institute of the Metropolitan Museum of Art, where dozens of her haute-couture clothes repose—including two stupendous gowns by Christian Dior, each looking like something plucked out of the armoire of the Snow Queen, their billowing skirts stupendously spattered with glittering paillettes and gleaming artificial pearls. Small wonder Time magazine, in its observation of her death, noted that she was "repeatedly voted among the world's ten best-dressed women." And why a society admirer once noted that Foy was so immaculate that she resembled "a picture that had been newly varnished." 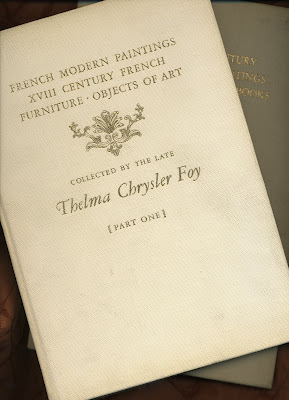 Further proof recently came into my hands in the form of a two-volume catalogue of the auction of Foy's china, furniture, and art, a sale that took place at Parke-Bernet in New York City in 1959, two years after the socialite's death. Page after page provides evidence that she bought the best, and decoratively speaking, when it came to the boiseried rooms of the sprawling apartment on the 17th floor of 740 Park Avenue—where she lived with her husband, Byron, a dashing Texan and longtime Chrysler executive—it was all about white paint, oyster and grey silk, dashes of pink, signed 18th-century French furniture, and major Impressionist paintings. That fresh, diaphanous decor was a striking contrast to the humble houses of Foy's blue-collar childhood, back when her father, Walter Chrysler, was a mechanic, and nobody ever dreamed he would become one of America's automobile magnates.

That particular palette appeared to be the preferred scheme of the former Thelma Irene Chrysler, whatever the residence's geographic location. Known as Foy Farm, her summer house in Locust Valley, New York, was decorated in similar colours, as seen in the photograph of its reception room at the head of this post—ash-grey walls, pale-grey-and-pink-striped upholstery here, pale grey there, and sumptuous silk-taffeta curtains of a colour House & Garden described as "pink tourmaline." The automotive heiress must have looked like an exotic orchid against those fresh, pale backgrounds.

The lyrical settings, however, concealed a pathological undercurrent. "It was a perfectionist collection; no note of counterfeit intruded," Wesley Towner wrote in his book The Elegant Auctioneers. "Relentless in her quest, the curator of that concinnate display would ceaselessly add new triumphs of acquisition, combing the world's great galleries to replace the almost perfect piece with one a hairbreadth nearer perfection." Towner added to this recollection a startlingly strange detail of how the Foys occasionally spent evenings together at home: "After the servants had withdrawn, Mr. Foy would get out the x-ray machine that was otherwise used medically—to stall the developing leukemia from which Mrs. Foy suffered—and they would spend the evening x-raying the porcelains to make sure the butler had not broken one and had it surreptitiously mended."

Much of the credit for the couple's domestic splendor must go to interior decorator Robert Samuels, the same courtly man her younger sister, Bernice Garbisch, hired to oversee the furnishing of her apartment at the Carlyle hotel in New York City. From 1908 until his death in 1962 he worked for his family's Francophile design firm, French & Co, an august establishment patronized by society swans such as Millicent Hearst, Janet Annenberg Hooker, and Gloria Vanderbilt (in her Mrs Sidney Lumet phase).

The New York Times noted in 1962 that Samuels's postwar interiors for Thelma Foy and her sister represented a sea-change in Manhattan decoration, "The smaller rooms, simpler taste, and more elegant lines of the French furnishings ... underlined by his way with soft greens, blues, and yellows." The decorator's work represented a sea-change in Foy's personal taste too.

Thelma Foy once had been a devotée of English traditionalism, and she briefly flirted with the neo-Attic elegance purveyed by T. H. Robsjohn-Gibbings. But 90 percent of the furnishings that went on the block at the Parke-Bernet sale were absolutely ancien-régime in origin, amassed over the last 15 years of her life. The spark for this Gallic collecting focus apparently was the Foys' acquisition of a Louis XV-style mansion, at 60 East 93rd Street, in New York City, in the 1940s. Designed by John Russell Pope, the house had been completed in 1931 for mining heiress Virginia Fair Vanderbilt, and its opulent architecture required a complementary decor. After the Foys moved to Park Avenue in 1954, the former Vanderbilt property became the headquarters of the Roumanian government's delegation to the United Nations and later still, a segment of the Lycée Français de New York. Today 60 East 93rd Street, gloriously restored, is occupied by the antiques gallery of Carlton Hobbs.

Vogue called the Foy's Park Avenue apartment "the finest French" residence in Manhattan, noting its antique gilded paneling and choice Impressionist paintings, including works by Renoir and Degas. "Everything reflects Mrs Foy's unerring collector's eye," the magazine observed, "her unswerving taste, and her talent for making a house gay and livable, as well as visually lovely." Milady's passion for pearl-coloured upholstery, however, raised some eyebrows. As a Parke-Bernet employee noted at the 1959 sale, "People ask us if anybody sat on her chairs. They certainly did. But, after they were used a few times, she ordered them to be cleaned or recovered."

Wonderful and informative post, Aesthete. I have been curious to learn more of Mrs. Foy over the years, and thank you for sharing your knowledge of her with us, your fortunate readers. Would that the swans of today (are there any, really?) were to live so rigorously elegantly.

The Down East Dilettante said...

Some of the fine boiserie from the Vanderbilt house parted company with those walls around the time that Foy moved out and into the Park Avenue apartment (in the same building as some family friends, whose own taste ran to the usual dumpy old money Georgian, but that'a another story). So perhaps some of the Park Ave. boiserie was the former Vanderbilt boiserie? The stuff does tend to travel. (and as long as I'm in a vivacious mood, I probably shouldn't commit this to print, but other friends bought a Foy daughter's former summer house a few years ago. Let's just say, um, that great style isn't necessarily passed down...)

SHE is the Parable of Innate Style of that which ONE can only be borne with, for in her wake she has left a lingering Aura of Glamour and Perfection that swirled from her mind, onto her body and outwards into her immediate surroundings.

I suppose the Xray machine, did double duty, although porcelain is beautiful in any condition to me...could this be where the term SOCIAL XRAY was taken from in the 80's? The Cup of Coffee ONLY diet sounds like today's Red Bull and Adderall diet.

This post, and Thelma Foy, are fascinating. And those gowns! I can't help but wonder, though, what her unerring taste would have produced if Walter hadn't become so fabulously wealthy. Those would be some stealable ideas :)

So interesting. You certainly did your homework! Mrs. Foy must have been a character...living on mostly black coffee...LOL

It would be interesting to know a few of the 1959 pre-sale estimates for her pieces.

The only word that comes to mind is "Self-absorbed"--x-raying the china? Thanks. Mary

What a wonderful post dahhling.. I enjoyed the detail & story you wove of such an interesting woman of the kind that is very hard to find today.

I have a worldwide perfume giveaway planned in a weeks time..so make sure to drop by and get more details then;)

that is very beautiful